The Orlické Hory (The Eagle Mountains) are located in the north-east of Bohemia. Two seasons are popular with tourists - winter with culminating attendance around New Year´s Eve, followed by quiet January, and much-sought-for time from February to mid-March. In summer, most tourists arrive in July.

The Orlické Hory PLA is a remarkably conserved landscape, which is formed by the edge of the Orlické Hory mountains, the slopes in front of and behind it and partly by the scenic foothills. Velká Deštná (Rainy Hill) is the highest peak. It rises 1,115m above the sea level. The mean altitude is 789m. The edge and the southwestern weather slopes have been deforested due to the long-distance ground-level concentration.

Divoká Orlice River (Rash Eagle River) passes through the Orlickohorská channel and forms a 29 km long section of the state border (from Trčkov to Zemská Brána). The upper stream is of quite tranquil flow but then breaks through the mountain edge and flows into the inland through the site called Zemská Brána (Land Gate). Here it forms a deep gorge that has up to 40 metres high bare gneiss rocks. This unique scenery has been designated as a nature reserve. Deep and steep valleys are also typical of the other Orlické Hory streams. Zdobnice, Říčka, Bělá, Kněžna, Olešenka and Zlatý Potok rivers with their steep valleys erode the land edges and in this way the characteristic creeping landscape is formed.

Today, the heads of these rivers lying on the central edge slopes represent islands of the most conserved biotopes, which descend from the mountains to the foothills through forest valleys. In the surroundings of their downstream areas there is a whole range of spring areas and waterlogged mountain meadows. The precipitation volume is above average for the country. Fragments of the indigenous vegetation can be found in Bukačka and Trčkov national nature reserves and also in the Sedloňovský Vrch (Sedloňov Hill), Pod Vrchmezím (Landmark Range) and Černý Důl (Black Pit) nature reserves. Jelení Lázeň and U Kunštátské Kaple bogs are interesting for their fauna and flora. The impressive beauty of this area is enhanced by preserved folk architecture.

Spring, summer and autumn in Orlické Hory offer a variety of hiking and cycling options. All interesting sights and areas can be reached by tourist buses, which are suitable for transporting bikes during the summer season (from mid-June until the end of September). Beautiful mountain ridges and natural reservation areas attract a lot of tourists for walks. Dozens-kilometre long tourist routes are marked in the mountains and the surrounding landscape of forests, meadows, fields, and picturesque villages. The forests abound in various forest fruit, such as raspberries, bilberries, and mushrooms. 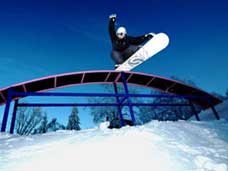 The Orlické Hory are an ideal area for skiing in winter. There are a lot of well-kept tracks for cross-country skiers. Those who prefer downhill skiing are recommended to choose one of the following skiing centres. Skiing and snowboarding centre in Sedlonov is suitable for families with children and beginners, who look for quiet and secure environment. Low prices and evening lighting make it an attractive area for skiers. Ski and snowboard rental and service as well as skiing and snowboarding lessons are available. Refreshment is obtainable in the area itself, or in the local restaurant Zlatá Koruna (Golden Crown) approximately 100 m distant.

Skiing centre Deštné v Orlických horách includes three ski lifts in area MARTA I, three ski lifts in MARTA II, one ski lift in area Spicak. Accessibility of Deštné and car parks right at the ski lifts make the centre popular with tourists.
Skiareál Olešnice and Snowpark Čihalka in Olešnice v Orlických horách, a five-kilometre distant village, there is a skiing centre (two ski lifts) and a snowboarding centre Čihalka with plenty of snowboarding facilities. Both centres grant artificial snow, night lighting and refreshment.
Half of one kilometr to the west from Destne is Ski slope na Špičáku. Its acceptable for biginners.

Sedlonov is also suitable for cross-country skiers. Fifty kilometres of trails are maintained in the area of Deštné, Sedloňov and Olešnice v Orlických horách, all of which can be found at the map. Holidayinfo offers on line information about conditions of cross-country trails. 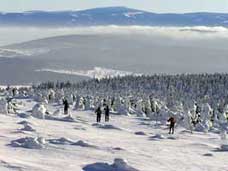